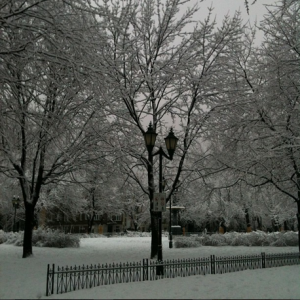 1.  Montreal has its own cardinal directions: You’re going to think I’m messing with you, but I’m not: Montreal cardinal directions are based on a near-90-degree clockwise rotation of the compass. That is to say, the sun rises in “Montreal South” and sets in “Montreal North.” The easiest way to get acclimated to this weirdo system is to learn which major streets run in which “directions:” for example, René-Lévesque, Saint-Catherine, and Sherbrooke are “East-West” streets; Parc, Saint-Laurent, and Saint-Denis are “North-South” streets.

2.   Poutine is very important. If there’s one thing that defines Montreal cuisine, it’s poutine: french fries + gravy + cheese curds. I’d never heard of this dish before moving here, but it’s as embedded in MTL food culture as that gravy is in your arteries. The spectrum of poutine offerings is vast, from fine dining to fast food, but I’m gonna go ahead and recommend La Banquise as your priority stop. They have the only confirmed vegetarian poutine in the city + they’re open 24hrs = winning.

3.   We’ve got weird money. You probably know that we run on CAD up here (make sure to keep the exchange rate in mind). But what you may not have known is that there are no $1 bills (or pennies, for that matter): 1- and 2-dollar coins (called “loonies” and “toonies,” respectively) are pervasive. My first visit to Canada in 2010, I was in a bar in Toronto and didn’t know the coin values when I left my tip for a veggie burger and a couple of pints. The next night, I went back to the same bar, and the bartender was lining up free shots when she saw me walk in the door 😉 FYI: Taxes in Quebec are “too damn high.” Between provincial and federal sales taxes, you’re looking at about 15%.

4.   We’ve got a lotta hipsters. I guess they’re everywhere these days, but Montreal seems to have an especially annoying brand of hipsters. One of the fun areas to hang out in the eveningtime is a neighbourhood called “Mile End.” This place is Hipster Central, but boasts a lot of fun bars for hopping to and fro. A few not to miss: Snack ‘n’ Blues (old Quebecker owners, great music, pool table, free snacks/candy), Casa del Popolo (cheap drinks, good DJs, decent snacks/sandwiches, music venue attached), and Le Cagibi (coffee shop by day, bar & performance space by night, queer hangout, all-vegetarian menu). During the daytime, pretentious hipster crap is balanced out by some pretty cool stuff: coffee, bagels, books, and books. Side note: surprisingly enough, Montreal is sorely lacking in the hipster beer of choice: IPA. More on that in my next post, though.

5.   Liquor sales are government-regulated: While you can purchase beer and a limited selection of wine at corner stores, or what we call “déppaneurs” or “deps” (literal translation: “to help out of difficulty”), hard liquor and good wine can only be purchased at Société des Alcools du Québec (SAQ) outlets. Beware: some of these outlets close early. If you’re just looking to pick up a pack of smokes, head to a dep or a “tabagie” (like a dep, but w/o the beer). On a related note: many Montreal restaurants allow you to BYOB, usually indicated on the website or storefront with “AVV”/ “apportez votre vin.”

6.   Mom and Pop are alive and well: We have our share of chain stores and restaurants, but Montreal boasts (what seems to me, at least) a larger-than-average amount of independently-owned businesses. Check them out, support them, and get a stronger sense of Montreal culture. Many folks talk about the “underground city” of Montreal, which does supposedly have a few hidden gems, but most of what you’ll find there are food courts and shopping malls—I recommend limiting your reliance on these areas. My take on the best of the best in MTL is coming up in my next post, but in the meantime, check out McGill Professor Jonathan Sterne’s comprehensive list over at his blog.

7.   Catholicism is alive and well.  Montreal has a diverse population, but it’s hard to ignore that giant cross on the top of Mont Royal or the daily peals of church bells sounding throughout the city. Montreal straddles a bizarre line between progressive (same sex marriage = legal since 2004) and scary (blackface still happens?!?). To me, part of this weirdness is linked to the religious roots of Montreal, like the fact that Quebecois curse words are all based on mocking Catholic liturgy (e.g. “tabarnak!” “hostie!”).  N.B. There’s also a large Jewish community in Montreal, which means lots of kosher delis and bakeries.

8.   Our transit system is pretty sweet*: with a variety of “all-you-can-ride” options, choosing le métro makes a lot of sense. The underground rail lines all sync up with major bus routes, so it’s easy to travel across the city to any destination. Rail lines shut down kind of early for the partying folk, but night buses run more-or-less reliably. And don’t forget about the convenience of the 747 bus, which will get you between the conference hotel and the airport for $10 (also included in all-you-can-ride passes). *Unfortunately, le métro is not good w/r/t accessibility. If you use a wheelchair or have other mobility issues, you should keep this problem in mind as you plan travels around the city.

9.   French is the official language—for realsies! If you read my first #scms15 blog post, you know my take on the bilingual nature of this city. But the key thing to remember is: street signs, websites, retail names, menus, receipts, food labels, transit maps and PA announcements—all of these things are required by law to be in French. So while you can get away with not speaking much (or any) French while you’re here, you will nonetheless be surrounded by the language. I truly encourage you to try out any and all French phrases that you know—it guarantees a better time in this city. If you’re a Francophile, be prepared for Quebecois slang, which sounds very different from Parisian French.

10.   It’s an island! Okay, maybe the more geographically-inclined SCMSer already knew this fact, but I actually didn’t know it until after the first time I visited the city. Why does it matter that you’re going to be on an island? For starters, the weather is particularly tough to predict and changes quickly. Also, there’s pretty water to look at (the St. Lawrence should be unfrozen by the time you arrive). Walk “Montreal Southeast” from the conference hotel, and you’ll run right into the beautiful Old Port waterfront.

Stay tuned for more tips and recs as the conference approaches. Don’t forget to browse the visitors’ guide in the conference program, and look out for a special Montreal segment in the next Aca-Media podcast, dropping soon!

Step One: Book a Flight

Flights to Montreal are stupidly expensive. I recommend a thorough and ongoing online search. Set up price drop alerts, look out for seat sales, cash in your air miles, whatever. I’m from Atlanta, and a typical flight back South costs me between $500-$750. If you can get to anywhere that flies Porter jets, they usually have the best deals (and FREE BOOZE). Another option for folks on serious budgets is to fly to Burlington, VT, and take the Greyhound bus into Montreal (about 2.5 hours).

If you can afford to stay in the conference hotel, do it. The usual convenience of proximity will be amplified by the brutality of our chilly March weather (see “Step Three”). If you’re searching for alternate accommodations, keep these points in mind: Fairmont The Queen Elizabeth Hotel (FQE) is located between “downtown” and “the Old Port,” about a 5-minute walk from two Metro stations (Bonaventure and Square Victoria, both on the Orange Line). This means that any hotel/hostel/airBnB near an Orange Line stop will be relatively convenient (sidenote: the Metro system here is great: easy to understand, takes you everywhere you’d want to go, and runs on time). FQE is also located on René-Lévesque, a street that makes up the main route of the 747 bus, our easiest way of travelling to and from the airport. There are lots of other hotels on René-Lévesque that would make airport travel simple, and any version of an “all-you-can-ride” Metro pass will allow you to use the frequent 747 buses to travel to and from the conference.

In late March, it’s either going to be cold, or really frakking cold in Montreal. You should prepare for the latter. You’ll want to make sure you either own or can borrow the whole Winter wardrobe shebang: heavy coat, gloves, hat, waterproof boots, long underwear, thick socks, scarf. Obviously, keep an eye on weather forecasts as the event approaches (n.b.: we roll on the Celsius scale here). Hopefully you won’t need the long underwear.

Cell phones: As far as I know, pretty much any US cell phone will work here, but it’ll cost you. Most providers offer various kinds of international add-on packages for texts/minutes/data. You can also purchase burners at a variety of stores. Wifi is as pervasive as any big city, though, so you could probably manage with a small texting/minutes package, or without any cellular coverage at all.

Montreal is the 2nd-largest French-speaking city in the world. The francophone culture is one of the things that makes Montreal so awesome, but it can also be intimidating. Here’s the deal: French is the dominant language, but most people speak English–especially if you spend your time in touristy spots (in many places, you’ll be greeted with “bonjour, hi,” the Montreal invitation to speak whichever language you prefer). I’ve known people to live in Montreal for years without speaking a lick of French, but I find that path kinda boring and a little disrespectful. My recommendation: if you took a few French classes in high school or university, brush up a bit. While you’re here, try out some basic communication in French; like most cities I’ve visited, people here appreciate the attempt and will likely give you better service for your efforts. Even if you can’t string together full sentences, try throwing in the occasional “merci” or “excusez-moi,” just for funsies.